An introduction to the Forms of Wing Chun

Wing Chun Kung Fu is noted to be a complete martial arts system, Meaning it encompasses the Mind,Body and Spirit elements of Martial Arts and not just the physical application of the Body, It is an invisible art that is based on Theory’s, Principles and Motos rather than Physical movements and Techniques, this is what could describe Wing Chun as a unique art unlike any other.

The purpose of the forms in Wing Chun are many however firstly they are a maze of understanding and hold all the theory of the Wing Chun System, study the art and learn the 6 Forms of Wing Chun and you will find all of the answers that you seek! The Wing Chun Forms are also used to focus the students attention on the following:

Flexibility (Becoming Soft) Power (Becoming Hard) Health (Putting our bodily structure back to its correct position) Focus (Controlling our Mind) Movement (To Learn the Shapes of the Wing Chun System) and many more reasons!

The Sui Nim Tao (The Master form) is the very beginning of a Wing Chun Students journey and also the end of the Masters! Known as the first section of Wing Chun the SNT is the first defensive form of two and is for training a beginner student in the theory required to start applying Wing Chun as well as gain a small insight into the complete Wing Chun system and form a foundation to move forward with. Basic power is learnt by tensing and relaxing the arm, strength is built up by repeating the core hand positions of Tan Sau, Fook Sau, and Wu Sau and the form focuses on the use of the upper body only (No leg movements). If you wish to perform well in Wing Chun, you must use the first sections of Sui Nim Tao to train the basic power and strength. There is no short cut, once the movements of the form have been learned, they must be practised seriously to train the power and strength. Every Wing Chun practitioner knows when practicing the first part of Sui Nim Tao, that it has to be slow. To train for the strength one has to be serious, and to be serious one must do it slowly.

The Chum Kui (Bridging Form) is the second defensive form of the Wing Chun System and introduces the use of the Wing Chun Students legs, referred to as the second section, this is used to training and use the power / strength that has been built up in the first section. In Wing Chun Kung Fu, the strength and power are used half soft, half hard. This is easily demonstrated when throwing a punch, your arm travels at great speed but the muscles are relaxed, this is the soft part. But just before you make contact with your opponent, your muscles in your arm tense up for a split second, this is the hard part. This later develops into full delivery of the Kinetic Energy of your arm and body into the target, without compromising balance. In Chinese martial arts, good use of this on off energy is often referred to as Ging

The Third Form (third section) is called the Bui Tze Form, The art of the thrusting fingers, this form is an attacking form and unlike the first two Wing Chun Kung Fu Forms which are defensive forms, The Bui Tze form helps to develop and train Power and energy into the Wing Chun Practitioners body and arms, It helps us learn to generate explosive power and to direct that energy from the fingers (Whipping) towards the opponent. Also the third Wing Chun form works on developing Elbow movements as well as higher level combination positions of our arms. Learning the correct position of the basic hand and arm movements but for greater accuracy and hopefully building up muscle memory of these parts include Pak Sau, Tan Sau, Gaun Sau, Huen Sau and Bong Sau, The practitioner must concentrate on executing each movement’s correctly.

The Muk Yan Jong form is performed like the other forms in the Air yet we also have the Wing Chun training aid called a “wooden dummy”, a thick wooden post with three arms and a leg mounted on a slightly springy frame representing a stationary human opponent. In the class room environment your training partner may be classed as the wooden dummy and you can gain a similar training effect if practised correctly however when on your own the use of such a tool is great for solo training exercises. Although representative of a human opponent, the dummy is not a physical representation of a human, but an energetic one. Known as the clashing form the Wooden dummy is used to refine a practitioner’s understanding of angles, positions, and footwork, and to develop full body power when meeting a stronger opponent. It is here that the open hand forms are pieced together and understood as a whole. 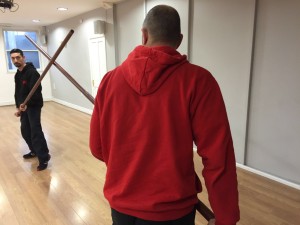 The Wing Chun Long Pole or commonly known as the Six and a half point pole or Luk Dim Boon Kwan.

This is the first of the weapons used in Wing Chun however not formally part of the system it is understood they were added at a later stage in the development of the System for the improvement on fighting strategies.

The Long Pole is a tapered wooden pole ranging anywhere from 8 to 13 feet in length, We term this as “Six and A Half Point Pole” due to the amount of movements executed in the form and encompasses the 7 principles of Luk Dim Boon Gwun (Tai-uprooting, lan-to expand, dim-shock, kit-deflect, got-cut down, wan-circle, lau-flowing) are used throughout the unarmed combat as well. The name six and a half point pole comes from these 7 principles, with the last principle: Lau, or Flowing counting as half a point.

Knives (or commonly known as Butterfly Knives (Baat Jaam Do)) 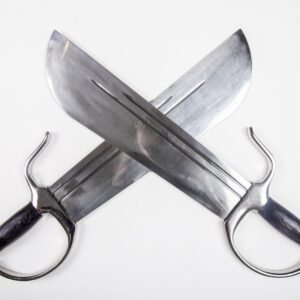 Do (“Life-Taking Knives”) As with all of the forms in Wing Chun the Knives form is broken down into 8 parts with these all being based around chopping and Slashing movements, the movements of the Knive can be seen in the open handed forms.

An Important note regarding the Wing Chun Forms:

When we learn the art of Wing Chun, we must know the objectives of the first three forms. After knowing those objectives, we have the right direction to practice most effectively and we have our reference material for all future training.

To Summarise the Wing Chun Forms!

The Forms of the Wing Chun System are not fixed, there cannot be a set of forms that are identical throughout all schools/Organisations and instruction of Wing Chun, The Wing Chun Forms are purely a method to memorise a Wing Chun Practitioners training at a stage of their journey and these will or can change, Our Wing Chun forms are a road map to the final destination and should be reflected in the other two core elements of Wing Chun (Chi Sao programmes and Lat Sao-Fighting Programmes) If your Chi Sao or Lat Sao changes then your forms will change!

We will promote a set form that for each of them that a collective base of students can follow and as we change the forms will change, as YOU change your form may change! Please do not get fixated that one form is the correct form as it will depend of what you are training in the other elements!

Since the Siu Nim Tau is the first form of Wing Chun, many people think that it is only a beginning course, This maybe partially true for some however the Siu Nim Tao is also referred to as the Masters form, We consider The Siu Nim Tau as the basis of Wing Chun however many of the movements of Chum Kiu, Bui Tze, Muk Yan Jong (Wooden Dummy), even Bat Cham Dao come from Sui Nim Tau and can be understood that this demonstrates that Wing Chun is a progressive system. So Sui Nim Tau is not just at the beginning course, but is an important foundation to become a Master of yourself and the Art of Wing Chun.